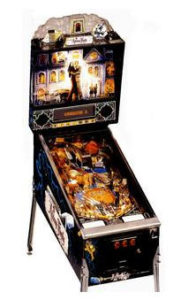 When it was first released, it made optimum use of the technology available at the time like under-play field electromagnets and the first CPU controlled flipper in the history of pinball machines. So it's not a surprise that this is one of the most 'in-demand' pinball machines even today.

The various components of this machine is like no other, and most people agree that few other movies based pinball machines come close to level of detail incorporated in this mean machine. Actors Anjelica Huston and Raul Julia have lent their voices to some exclamations during the course of the game as well as re-recorded several lines of the movie for the game.

Another feature taken directly from the movie is the blue bookcase in the upper right corner of the play field. Gomez shows this to Uncle Fester in the movie and in the game, the bookcase is a secret vault that turns around once all the letters of the word GREED is lit up.

The central feature of the game, of course, is the mansion that has 12 windows that correspond to rooms featured in the film and the player is awarded points based on where the ball lands.

The character Thing , like in the movie, features often in the game play,in most instances to lend a helping 'hand'.

The staircase ramp, the bear kick , the train is all taken right from a movie and if you were a fan of the movie, this machine will help you relive every moment. And if you haven't watched the movie, this Addams Family Pinball Machine will make sure that you do.